It’s the end of the school year, kids are gearing up for no more school, summer break and graduations.

Not my kid though, Doug is being held back. He’s going into Super Kindergarten/summer school.

Doug’s healing is slow going. In fact, we have had a bit of a setback. His knee has a lot of swelling and it’s pushing his kneecap back out. To be clear, back out is the wrong direction. Also, on a separate issue, one of his TPLO pins is cutting into his bone a little. 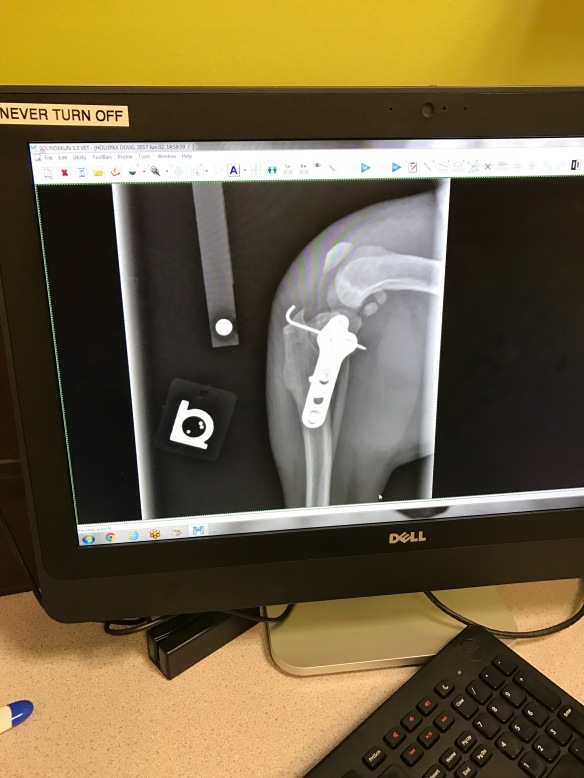 At our appointment last Friday they called me into a room.  Nothing good comes out of being called into a room. The surgeon said that we should cut back on activity for four weeks. Cut back on activity? What activity? Please explain yourself. What he was saying, as my soul was screaming NOOOOOOOO, is that Doug should not progress right now. We should not increase or change anything for four weeks. That adds four weeks to our total recovery time.

That would take us to 20-24 weeks.  Otherwise calculated as five to six months.

We are at six weeks now. My guess is, that come two months, Doug will be strategizing how to make wind chimes out of my bones.

He is a prisoner in a world that won’t let him run. Or jump. Or do stairs. Or run. Or run some more.

He’s most definitely planning my death.

We followed up our surgeon appointment with a therapy session.  We were hoping to start water therapy but with the activity setback, therapy will need to be low-key for the next four weeks.  They put some numbing gel on his knee and did some laser work.  I wish there was numbing gel for my hopes and dreams for Doug’s summer.

He’s still super adorable though!  And trust me, there is a death stare under the doggles.

Be sure to join us over on Instagram to see the photo journal of Doug’s time in jail. We can be found @Dougholupka.for.president