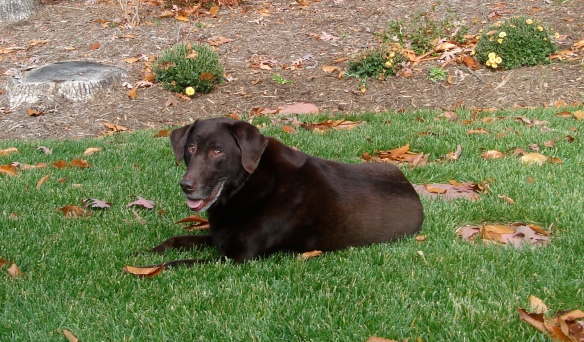 Max was a Chocolate lab. Super sweet and furry as a puppy, wild during his teenage years (and well into his 30’s). During the wild times, I thought my parents might set him free. Eventually, as he grew older we were able to look back with gut wrenching laughter. Those moments easily become some of your favorites. It was however in Max’s golden years that I learned how true the phrase “old dogs are the best dogs”. Not because he was older and less energized to misbehave. He found plenty of mischief at every age. But he had a soulfulness about him that was so peaceful. It made me realize what a beautiful thing the dog mind is. They don’t think backwards. They don’t count their regrets. They live in the here and now and that soulfulness stems from being happy in and for every moment. In fact, towards the end of his life when I asked the vet the painful question about whether I’d know when it was ‘time’, she told me with dogs like Max, the really happy, food motivated dogs, I probably wouldn’t ever have complete certainty. She predicted he’d thump his tail for me up until the end. He proved that theory to be correct.

When I started the search for a Lab to rescue, I was in many ways looking for Max #2. Not a replacement (Max was still with me), but in my head I hoped I would get as lucky twice around. That was probably misguided but I had a ‘type of lab’ in mind so I set out to find the right rescue group.

Many breed specific rescues are close by where you live. Some will only place dogs in local forever homes whereas others have broader rules for that. A search in google for “dog rescue groups in Virginia” yielded over 50 pages of results. When you’re in the thinking-about-it-phase, start there. I did.