I left for the beach on July 2nd.  The day before, I went and stocked up on Jake’s food.  Stella & Chewy freeze-dried raw.  I buy a variety (duck, chicken, beef and venison) and rotate after we finish each bag.

On July 3rd, I got an text that the FDA issued a recall on Stella & Chewy freeze-dried chicken. The noise that came out of me while reading that was frightening. I immediately called the dog sitter to check each bag (chicken and non-chicken) to see if we had any of the lot numbered bags.  We did.  And Jake was currently eating from it.

I felt sick with worry.  Since it was already the holiday weekend, I called The Life Center (our ER vet) to ask them what to look for.  They said ‘pretty much anything out of the ordinary could be cause for concern’.  Um, my panic level just hit defcon 5000.  As mentioned, our dog sitter was new.  Jake’s entire existence is out of the ordinary for her.  How would she ever know what is normal and what could be Listeria.  I explained (in a voice that poetically, only dogs could hear) the situation and that I would need specific things to look for.  They listed out nausea, vomiting, diarrhea, stumbling (oh great, this one was not going to be easy), confusion (uh, that is Jake’s middle name).

I spoke to Tayler and we decided if anything gave her concern, she would just take Jake to TLC.  I took slight comfort in the fact that Jake is pretty iron stomached. Not that he can defend himself against Listeria but he has eaten a lot of things that should have made him sick and never did (rocks, plumbers putty, frogs, birds, bunnies).  When Monday rolled around, I called our normal vet.  Symptoms can show up 7-70 days after exposure.

Unless attempts at bringing sexy back are a symptom, so far he’s doing OK! 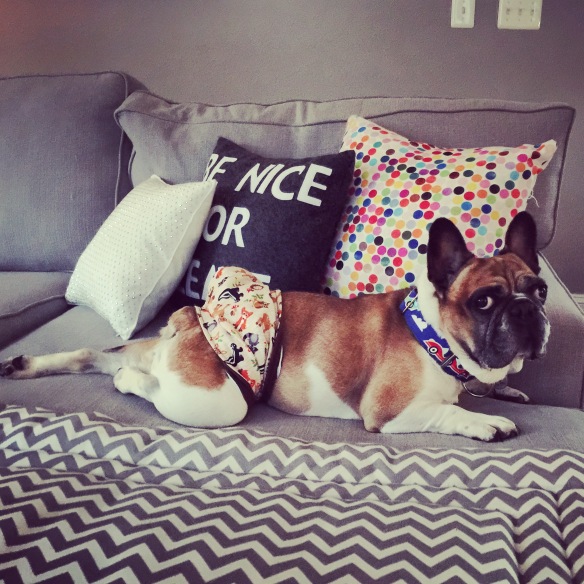