Let me give a quick recap of the health issues I have faced with the dogs. An asterisk indicates multiple dogs and/or flare ups:

I’m sure I’m leaving out issues that have long ago left my memory. But you get the point.

The surgeon took one look at Doug’s X-rays and said, I know the issue. He then did an extensive inspection of Doug’s leg (Doug did not love this part and I could tell by the movements the doctor was doing that he had for sure narrowed in on the area of pain for Doug). We did a CT to confirm.

I would like to add my recap to the (male) doctor was as follows: every day, it seems more and more that Doug’s leg was put on wrong.  I’m going to guess you didn’t play with Barbie as a child (I wish you could have seen his face at this point), but if you had, you would know that there is a right and wrong way to put Barbie’s leg back on when it falls off. Doug’s Barbie leg is on wrong.

He nodded (and somehow managed not to laugh since I was coming across as very serious) and told me that in his entire career as a veterinary surgeon, no one had ever used a Barbie analogy.

Doug has a grade 4 luxated patella. While 90% of turned kneecaps go to the inside, Doug’s is of the rarer variety and goes to the outside. Grade 4 is the worst, it means that the kneecap can no longer move back into place without surgical intervention.  It seems as Doug’s leg grew, his bones pushed his kneecap out of the way and continued to grow without it. So the doctors have to go in and shave his bones to make room for the stray kneecap.  (I almost passed out when he said that).  They are building a 3D of Doug’s leg to figure out the best way to repair it.

Doug’s onset of symptoms were right on track. For a few months he would hop at the end of long walks or bursts of intense zoomies. He was limping more over the past few months. Then last week, he went lame on that hind leg.

Doug was supposed to be the dog that showed me what this illusive ‘annual vet visit’ is all about. Doug had other plans and clearly wants to be more like his brothers. So we will rebuild that wonky leg (hence the extra asterisks above) and we will figure out how to keep him still now and after the surgery (I bought more vodka to help strategize on that one). The one thing that Doug has going for him (in addition to me), is extreme body strength.  Doug currently runs on three legs, just as fast as he does on all four.

I saved Jake’s giant stroller and everyone kept asking why are you saving that? Their thinking was that I would likely never have the need for it again.

HAVE THEY NEVER MET MY DOGS????

Here is Doug.  High and drunk from the anesthesia and sedatives and pain meds.  We will keep you posted as the surgery gets scheduled.

So high he does not notice treats. 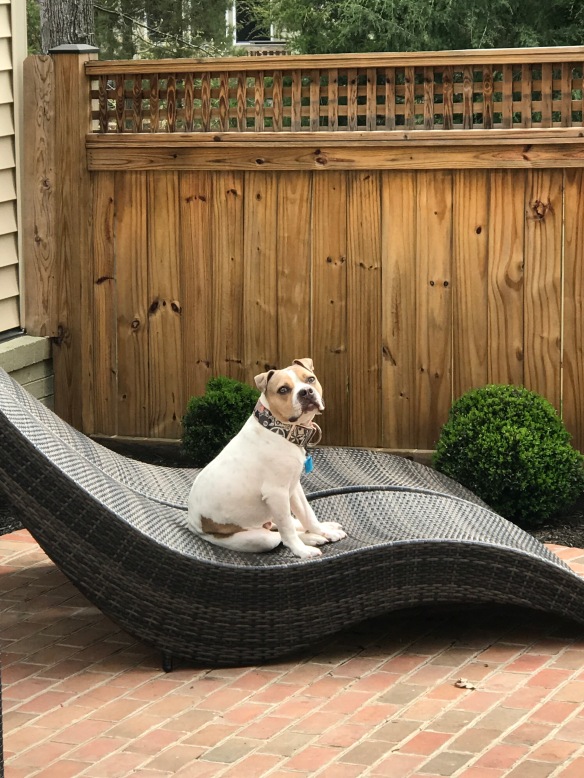 Leave a Reply to Queen of Zoom Cancel reply