The reason Jake went on Prozac was that after Melvin died, his days were harder for him to manage.  In fact, some things he couldn’t manage at all. The howl-crying at the door I had mentioned, but he also went back to having severe separation anxiety when I’d leave. It was worse than when he first came to live here because after Melvin died, he was truly alone in the house. I know how to work him through the SA but once we started the Prozac, the remaining SA went away, even though it wasn’t a goal for taking it.

So in essence, I forgot about a couple things that Jake did pre-Prozac.  But have no fear, he has reminded me of all of them.  At once.

During the snow storm, when I’d go outside to shovel, I’d hear Jake.  It was a noise I recognized, he was honking, like a duck because I’d left him alone.  He had not done this for several months, why was he doing it all of a sudden. (In Blizzards, your brain slows down, true story.).

He also suddenly could not be without me, but not in a cute, cuddly way.  If I got up to go to the loo, he would frantically scramble to get up and run to find me in a ‘HOLY CRAP WHERE DID SHE GO I’M ALL ALONE AND MAY DIE’ way.  I’ve had a velcro dog.  Velcro dogs follow you calmly to the loo.  Jake ‘ran’ and plowed into walls desperate to locate me. Why in the world was he doing this? (my brain, still in slow-mo).

Then, as I was cooking in the kitchen and Jake was sitting in the dining room, full view of me, he started barking at me.  The ONLY time he does this is if a Kong rolls under furniture.  I looked, no Kongs.  He kept doing it.  Sitting. Barking. Then he did the same when I was watching TV, sit and bark.  And when I was in the shower. Sit and bark.  So much sitting and barry-white-voice-barking.

So… I’m back in planning mode.  We are going to see the behaviorist for his anxiety.  Never, ever, is life dull! 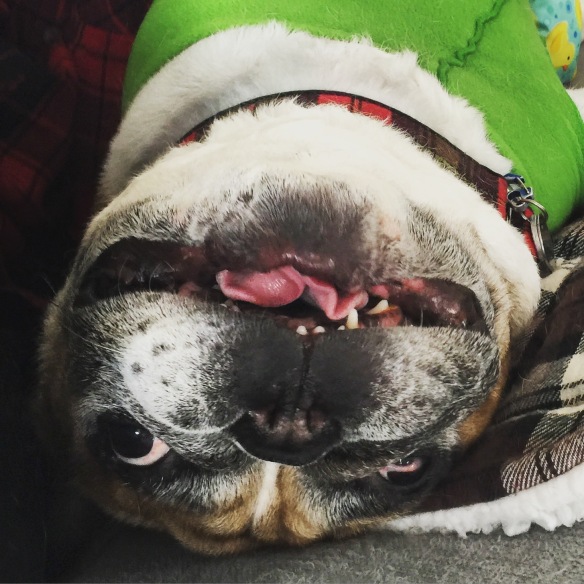 11 thoughts on “Weaning off Prozac.”