Doug has never really shown interest in chasing squirrels.  He might see them and stare but for the most part, no. Obviously last spring through fall, he was on post-surgery tie down, so much more so, nope to squirrels.

This year, Doug is pretty aware of the two squirrels (they have lived just behind our fence for YEARS and I named them Breakfast and Dinner because Jake used to hunt them 24/7, even in his sleep) who use our yard as a dumping ground for acorn shells and squirrel germs. Doug doesn’t hunt them like Jake, he is much more of the: I shall chase after them but hopefully I don’t catch them because they could be violent or be concealing a weapon.

He will see them from the couch, and sometimes forget he’s inside as he goes to chase after them. Almost always, they will see him (whether he is inside or outside) and do a freeze with a look that says, you are way less scary than the dog before you, and then they will take off. If Doug is outside, sometimes he thinks, I guess, that he can jump over our 7-foot fence. He however, cannot.

Where dat squirrel at? 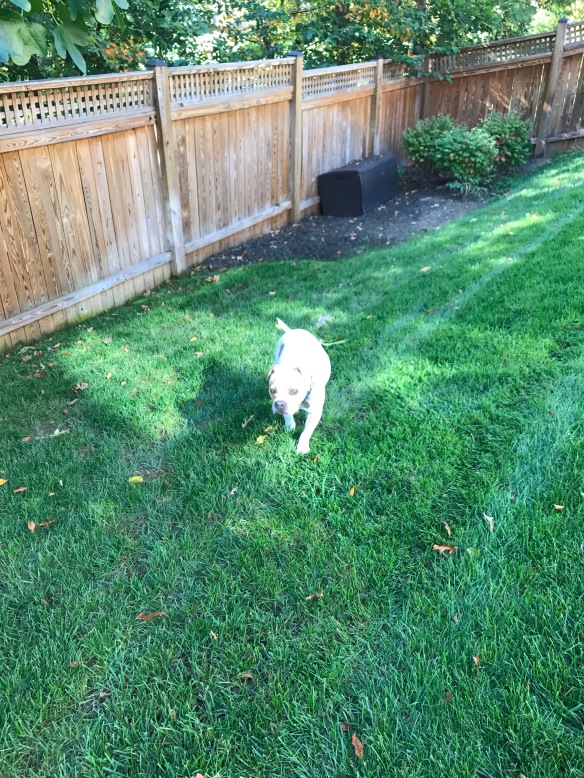 It’s all fun.  If a squirrel drops anything in its efforts to escape, Doug, true story, will go locate said item (an acorn) and bring it inside as an extra FU.  I just love having acorns in my house with squirrel saliva all over them.

So to recap, squirrels = friends/playful.

Move over to the driveway side of the house, where Boy Bob (Bob 2) taunts Doug with his meowing. Doug is way more aware of that window now and he polices it pretty regularly. Recently I noticed that Bob’s food bowl was being taken over by ants so in true crazy person mode, I googled ant-less feeding solutions.  Found a few and I’ve been outside setting up some of those fixes, along with a new condo for Boy Bob to take a break from the elements. My being out there makes Doug even more aware of the Boy Bob situation.

Well this week, a crow has taken up residence in our driveway area.  I have never once, in seven years here, seen a crow.  So it makes sense that the first one to move in, moves into our yard. Apparently the crow thinks the condo and food bowl are his. Or hers. I don’t know crow gender. Let’s call him S/he.  So this giant food thief is always lurking. This has not gone unnoticed by Doug. There is nothing, NOTHING, that Doug flips out more over than this crow. I don’t know if they know each other from the streets of  South Carolina or what, but Doug sits at the window like a scarecrow and comes to life horror movie style when the crow arrives. I have yet to catch it on film because the home camera does not pick up that window and if I’m home, I’m just trying to avoid having the crow fly into our house via a suddenly broken window. 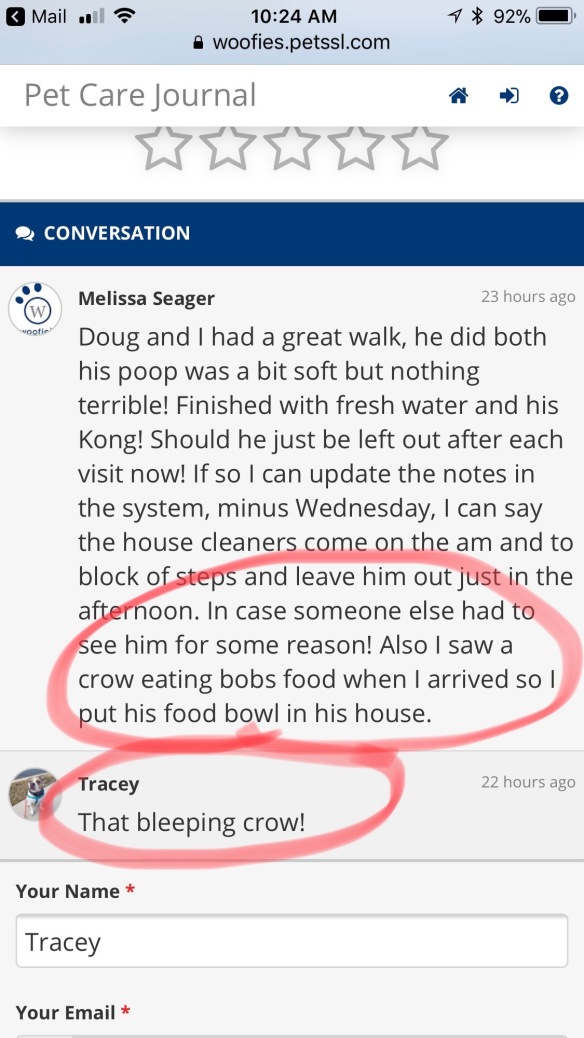 To maintain my sanity on this issue, I do pretend that Doug is defending Boy Bob’s condo and food. It’s the story I plan to tell the window replacement company.