You might hear me reminding Melvin that he can’t drink water after he eats.  You might see me taking his water bowl away, mid-gulp.  You would also probably see me do the same thing to Jake, pre-meal.  Withholding water?  Abusive. Yeah, that’s right,  I withhold water ten minutes before and ten after. Sue me. Thy eat a raw diet. They are liquid burpers.  You do the math.

What do you have against liquid burps?  I think they are tasty.

We go for walks and sometimes the boys don’t go #2.  But I know they need to go.  I find it odd that they need to go but they don’t.  So I take them out back and then I remind them that they have to poop by saying ‘go poop, poop, go, go poop’.  I say it fairly calmly, unless it’s raining (and then I yell it from inside) but still, it’s me, in the backyard, chanting poop to dogs. Crazy right?  I don’t stop there, I walk around the yard, following them, reminding them why we are STILL outside, I say things like:  ‘I know you would prefer to graze, but we’ve been outside for a long time and I have to work to afford you so I’m really going to need you both to GO POOP.’ Every once in a while, I throw in ‘for the love of God, poop.’ The thing is, I have 100% never been wrong about them needing to go.  It can be frustrating when they don’t share my knowledge of the situation. Sometimes,I give up and Jake comes in and poops in the doorway.  Then he looks at me like ‘what? you said to go poop.’

Seriously, I did what you said to do. 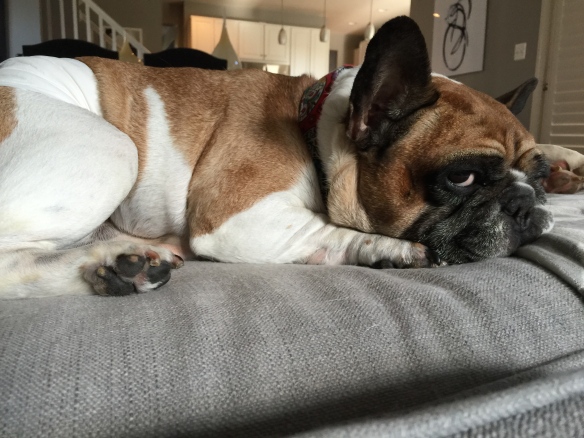 Lastly, I don’t let either dog lick themselves.  Sure, the occasional ‘lick the privates just because you can’ but for the most part, no licking.  Normal dogs lick and then move on.  Allergic dogs, they lick like there is no tomorrow, like there might be a buried treasure inside their paw.  If I let the boys lick, they would never stop.  They would not be dogs, they’d be two giant hot-spots with googly eyes and nubbin tails.  More than once I have gotten dirty looks at the vet when i calmly say ‘no licking, bud’.  Some people even gasp.

We can’t lick ourselves but we can still lick each other.

Am I the only one? Do you guys do things that would seem crazy if not explained (and maybe still after explanation)?