The whole ‘what day is it’, is so real right now. Maybe that is because every day is the same version as the previous day. I still feel like it is March 20th but that March 19th was a year ago. I have reorganized the house 72 times. I have started moving furniture to different rooms and I often decide to space out chores, just to have something to do, on all the days. Some days Doug is happy I am here and some days he wonders why I never leave. I don’t recall the last time I came home and he was excited to see me, because when I leave, he usually comes with me. 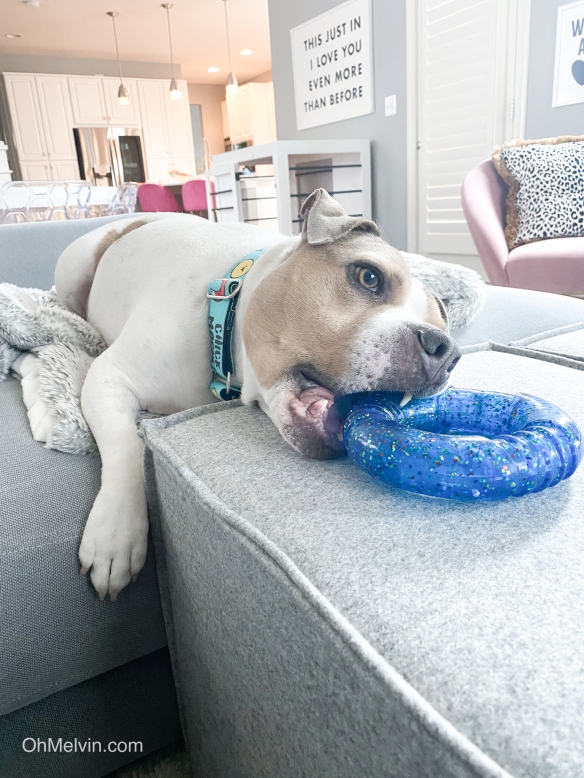 But having this time with him, is everything that is beautiful in this life. During our time in quarantine, we have reached six months with the onset of Neuronal Ceroid Lipofuscinosis. It is not lost on me for even one nano second, that many dogs do not live beyond six months once symptoms start to show. Six months seems to be how everyone talks about it. Statements like: If they live six months, let’s see where we are in six months, the next six months are telling. Now that we have reached this milestone(?), I don’t really know what the next chapter is. Currently, Doug is in the progressing slowly segment. If you have to get NCL, this is the coveted group to be in. It means that the disease is progressing slowly and steadily. This gives us options to dial treatments up and down and more importantly, it gives Doug a chance to acclimate. We hope to stay in the slow/steady group. I would give just about anything to stay here forever. The other, less appealing/heart wrenching group that goes beyond six months is, sudden decline/rapid deterioration. There are no signs that is coming. So each time a new symptom pops up, we have to sit and wait to see if it is the bottom dropping out. So far, I feel like the luckiest, most blessed, two creatures on the planet. Which is a lot, for facing down a fatal disease.

NCl is hard to watch with slow progression alone. I try not to visualize what fast decline would be like.

None of these things are the end of the world. But let me remind you, Doug is four. Spiritually, Doug is an exuberant adolescent who loves mischief and destruction and exuberance. His brain however, is aging faster.  Little pieces disappear and it’s hard knowing when something he can do now, he won’t be able to do in the future.

This disease feels the most unfair (compared to all the dogs’ issues). Part of that is likely that we are currently living it, but a good portion of it is because Doug is young. I might not argue, or complain, or rant about how hard and unfair losing him will be for me, and I’m still forced to recognize that in some bizarre way, Doug may be my most healthy dog. But none of this is even remotely ok. That he is being held down by this disease at such a young age, when these are the years he should be running zoomies with his bionic legs. If someone came to me and said, they could heal Doug and he would know happiness and joy but he couldn’t be with me, I would let him go. There are a lot of dimensions to rescue, but for me, it’s giving the boys a beautiful forever and a long(er) life measured in joy. Doug deserves to write all his chapters.

No one has come knocking with the cure. So instead we do what we do best. Packing a shit-ton of joy into the time we have. And Doug still celebrates every moment as if it is the very first glorious moment of his life. He is a joy junkie, just like his brothers.

Joy isn’t blindly pretending that none of this is happening or that any of it makes sense. Joy is acknowledging all the shitty parts, but not forgetting to see all the beautiful parts that exist simply because we have today. Doug tipping over when he poops stinks (pun intended), but he still believes the world begins and ends with all things food. Holding him may not stop the room from spinning, but it doesn’t change that Doug was homeless for months and now he is still living his very best life. Joy is recognizing that Doug exists outside of NCL. It’s impacting him, but I will not let it define him. Joy is also about not allowing all the big bad parts to overshadow the little moments. The little moments are where we live. The little moments are where we shine.

Doug healed a lot of the grief of losing Jake and Melvin, and the idea of losing him makes all grief feel like a nearby brewing storm.  I recall the darkness I felt to not have any dogs in the house after Jake died. The reason Doug is even here is because that darkness started to feel overwhelming and I decided to adopt sooner than my heart might have felt it was ready for. Part of my healing from the loss of Melvin and Jake, was to put my active love for them into something here. I have an infinite love for them, but there is always going to be the need to give that love in the here and now also. And the thought of a Melvin, Jake and Doug love lingering aimlessly with nowhere to go, I am not sure how to prepare for that. But I think it likely looks like rescuing the next dog, while Doug is still here to show them the ropes. That dog, will have to be the unicorn of unicorns to fit into what we have coming. I believe that dog is out there though. The same way Melvin, Jake and Doug all found their way here with very little effort by me.

But today, in the center of a pandemic, joy is being home with Doug during this crazy crisis. I get to spend all day, every day, with him. I will always look back on Covid-19 as the time the universe gave me extra beautiful moments with my boy. I am fortunate to still have a job, and to be able to work from home. Most of the parts that are hard for us, stem from a lot of privilege to begin with anyway, so we are pretty much among the most lucky ones. I would never say ‘choose joy’ every damn minute of this crazy time, but instead, don’t forget to see the joy. I don’t wake up on any day and think, ‘one more day of quarantine’. I wake up every day grateful that Doug and I have another day together. 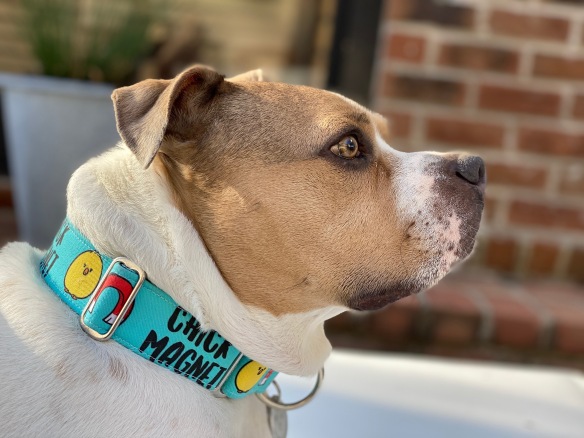 Hang in there. We know it can be hard. To those on the front line, healthcare workers, grocery staff, those doing delivery of any kind, those essential workers who are keeping us up and running, THANK YOU. You are the heroes of the world. For every complaint that creeps into our quarantined minds, we should send out infinite gratitude to those doing the hard work.

12 thoughts on “NCL, Coronavirus and Joy.”