It has been a little too busy over here. I am helping out with some extra projects at work so that is one part of it, our roof decided to give up 7 years into existing so when it rained ALL week last week, it did so outside AND inside.

Here are some highlights as we call ‘uncle’ on May!

Have a wonderful week!

Here are some updates to get you all caught up.

Doug loves being outside.  I had this glorious vision of summer, I’d leave the doors open and Doug would travel from inside to outside, napping, playing, being a dog.

Since surgery, Doug has needed to be in his jail cell or on a leash, 24/7.  I mean we have setbacks from not even doing anything (but not from doing nothing). But for all of you that fear that the yard dog doesn’t get his fill, oh contraire. He does, it just happens to be on a lame tie down. 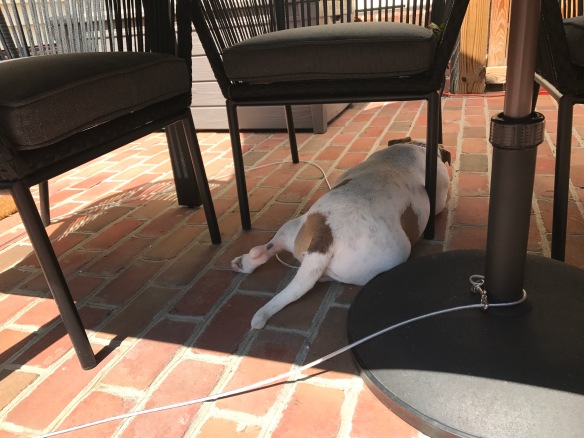 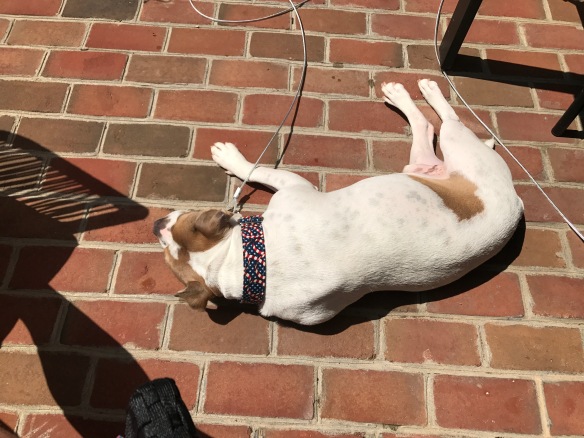 We just hit 2-months post surgery.  We were supposed to have a three-month recovery time. That has now stretched into six months. Doug has been on limited activity (from his already limited activity) and we are now coming off of that (hopefully).  We have our two month X-ray on Tuesday. Fingers crossed that he is back on track and we can resume hard(er) core rehab.

We are rocking the boot on his good leg!

We were recently granted permission for him to do steps once a day so now he sleeps super soundly back upstairs (still in jail though)!  Ahhhhh, the little victories are so sweet!

Most of you probably saw the video I posted on our Facebook page about my little inmate being excited to see his favorite warden return from vacation. I decided that upon return from vacation, I would grant him release from jail (with gradutaiton to tie down). At his parole hearing I asked that he keep all four legs and tail attached to his body and keep paws on the ground. This was him during minute one. He’s not allowed to jump, so yeah, it’s going great. Also, apparently death stares continue beyond the jail cell, so that’s fun. 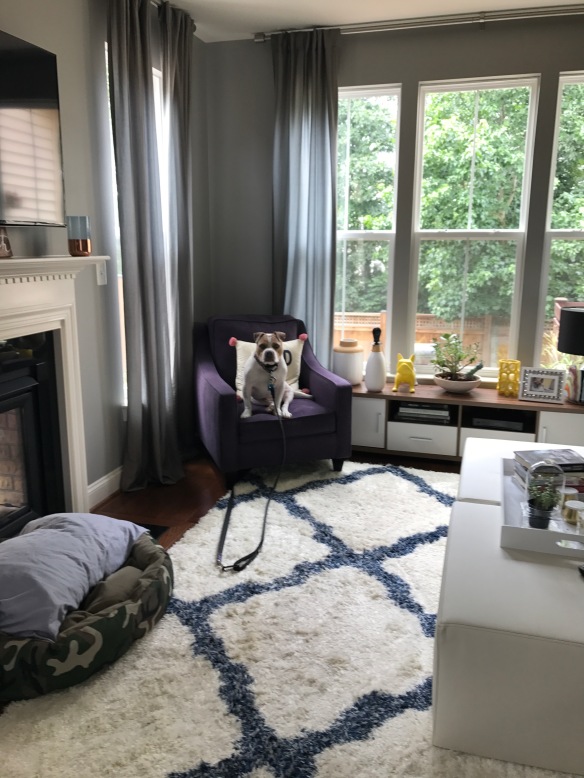 She’s still kicking it in the hood. Doug clearly does not have the 360 degree eyesight that Jake did.

As you will recall, Bob is the feral cat that I started feeding last fall, when she was just a kitten. Then Bob got knocked up, and her gender became more obvious, but I kept her name anyway. She’s Bob. Bob was trapped, she nursed her kittens and they were adopted out.

Bob got spayed, vaccinated, ear tipped, microchipped and got a three-month tick preventative this past week and has come here to recover.

Bob is an angry, rebellious teenager. And everything is apparently my fault.

Listen Bob, I get it. You’re a slutty little vixen (that sounded judgy but I fully accept who you are) and after a few nights of unprotected boy-toy time you started gaining some weight. Then one day, kittens dropped out of your area. I imagine that was uncomfortable. I don’t know how you felt about being a mom but you seemed to step-up and kept the kittens well-fed. Then the rains came, you moved the babies to higher ground and then giants stole your babies, trapped you and forced you into a cage with the kittens to be their food source. It all seems pretty hurtful.

Then one of the giants took you to a place where they poked and prodded you and then took out your lady parts. Then a different, yet familiar, giant picked you up and put you in a high-rise cage that she built with her own hands. Even though that familiar giant paid your vet bill, and is allergic to you, and reaches into the cage several times a day to feed you, give you fresh water and clean your litter box, you take time out of your very busy lying around time TO HISS AT HER LIKE VICIOUS LION.

Yes, folks, that’s right, inmate-Bob hates me too. I go outside and use soothing tones and feed her really, really good food and she basically gives the cat equivalent of a F U. Every time. It rained yesterday, so I went and bought a huge tarp to keep Bob dry and I spent a long time trying to aerodynamically figure out how to utilize the tarp and not SUFFOCATE BOB at the same time and still that little hussy (sorry, still no judgement) hissed at me the entire time. Every time I reach in to fill up her food bowl I wonder if that will be the moment I learn what cat attack feels like.

I don’t blame her. She does not have a clue as to why her life has been disrupted and when, if ever, she will back to walking the mean streets. The answer to that is, SOON, very soon. Once free. my guess is that she will return to the front of the house where I was feeding her before her teen pregnancy and that is fine. I will feed her wherever.

I am also moderately concerned that she and Doug are planning some sort of prison coup. They can probably communicate telepathically.

I need a sturdier lock on my bedroom door.

The only thing that I know with absolute certainty is that cleaning a litter box is a new level in hell for me. It’s not even that there is poop or pee, I mean the scoop makes it really easy. It’s the smell of the fresh litter. It’s so overwhelming. It’s like someone sprays a powdery,  deodorizing, air freshener directly into my face every time. The smell haunts me, all day.

Here is Bob being introduced to her condo. This is right before poop started flying out of her butt.  It made me miss Jake.

She looks super sweet. Until you look at, lean towards, reach into or try to help out in any way.

It makes me laugh how much Jake would HATE the mere idea of Bob, let alone seeing her in his yard.  I’m not even sure I would have taken her in if Jake was here, his prey drive was so severe. Bob’s existence would have haunted him day and night. He is probably flipping out about her as I type this.

You will recall that there is a feral cat in my neighborhood that I named Bob.  I feed Bob and I bought Bob a cat condo.  It’s comical, because I’m deathly allergic to cats, but Bob deserves for someone to love him/her and luckily, I am not allergic to love.

There have been several attempts to trap Bob in order to get him/her fixed and vetted.  No luck. So I have just continued to put food out every night. About a month ago I noticed that Bob was getting pretty chunky (no judgement) and realized that Bob was probably pregnant (still no judgment). In the past week, Bob has been very demanding about food.  S/he will loud meow (this is a very technical term) outside my window.  We have a little routine.  S/he demands food, I go outside to fill up the bowl while s/he hides, then when I go inside, s/he eats. Whatever Bob wants.

This weekend, a neighbor found kittens on her deck.  Bob was watching them from the woods.

The theory is that Bob lives in the sewer.  She had her kittens there but when the rains picked up here, she moved them to higher ground.

A lot happened in the 24 hours following the kitten discovery. The kittens were taken into rescue.  They are about 3-4 weeks old. Bob was trapped and has been reunited with her babies.  She will continue to nurse them for a bit longer.  Then I will take Bob to our vet to have her vetted and spayed and microchipped to me. We will then introduce her to my backyard and garage (temperature controlled) to see if she would like to call it home. Due to my allergies, that is the best I can offer her. I’ll continue to feed her as long as she continues to come here to eat.  If it’s determined that Bob could be a house cat, then we would love to get her adopted out, but that is unlikely.  Bob likely prefers to be undomesticated. The kittens will be adopted out.

Also, her name is staying Bob. It’s part of her story.

Bob in the trap.

Reunited with her babies!