Today is Melvin’s Gotcha Day!  It’s been five years since I was given the most awesome life role of loving him.

Buddy, you had me at hello. 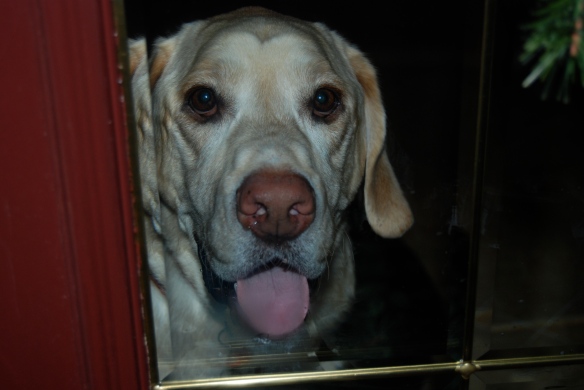 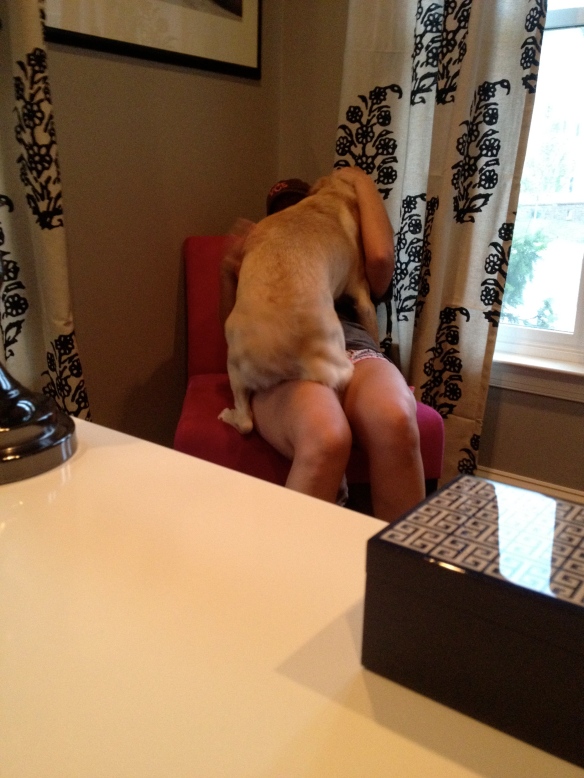 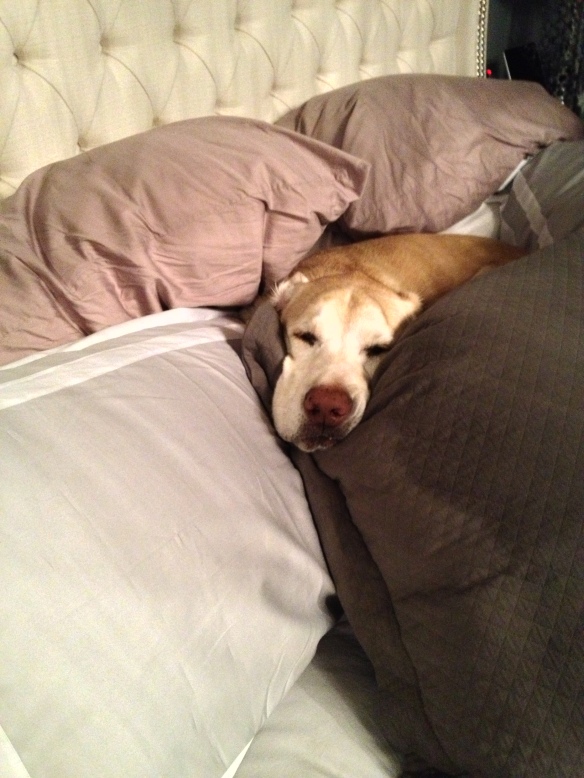 Melvin was watching Jake as Jake eyed Melvin’s bed.  Jake thought about it and then opted to pull the purple pillow off of the bed and ride sidecar.  Ahhhhhh, compromise! 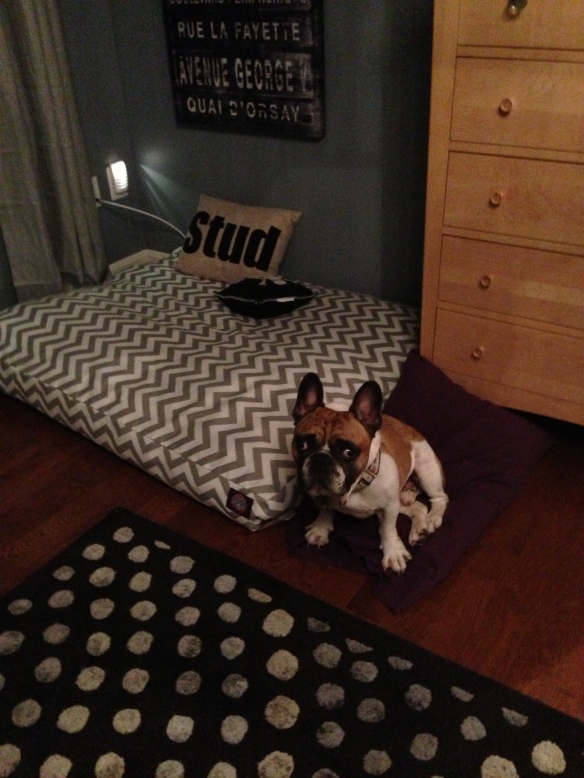 She said its been seven months since I came to live here but I sorta just think this has always been home. 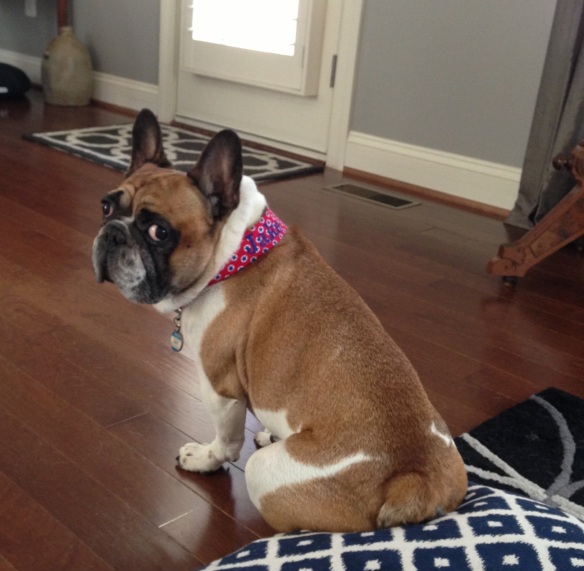 I had an old life someplace else, I guess I remember small parts of that. The people who I lived with were not home much.  I sat around a lot, waiting for them.  I don’t sit and wait so much here, and it’s pretty awesome (and when I do it’s in my new sitting position of my hind legs between my front legs!).  Sure She leaves, but what’s different is that I can tell, She’d rather stay.  She doesn’t look at me and my brother, T-Rex, as something bothersome.  She looks at us, and I know for sure, the moment she can come home, she will.  And when She does return, I dance!  Actually, it’s more of a bunny hop! I really, really, really like Her.

I had a yellow brother at my last address also.  That one played more than this yellow brother.  But when the people would leave, they’d take that yellow brother with them.  They wouldn’t take me though, they left me home.  So I guess I like this yellow brother better.  He stays home with me, and he checks in every once in a while so that we can keep our gang-bond strong.  Brother bonds are better than playing.  I did not know this. 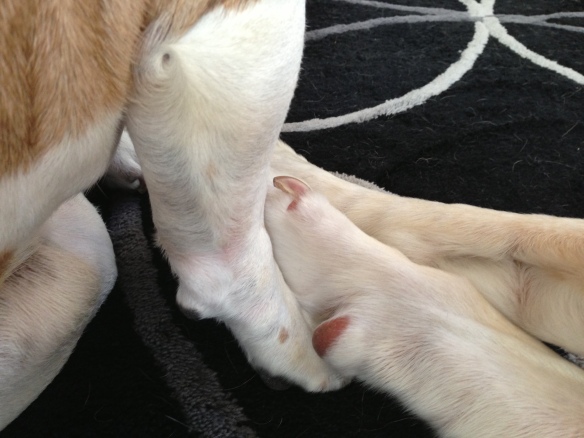 The thing about being here is that there are no judgements.  No one punishes me when I want to show the carpet my love.  When I gots the itchies and roll around like a fish-outta-water, it’s all good.  When I eat and get food all over my neck waddle, She just wipes it up. I can be me!  In all my glory, I can just be Jake!

I’m still working on not having to sleep in the box at night.  I mean the box is in Her room, and yellow dude sleeps close by but boy would I like to snuggle up on one of them during the night.  Apparently I honk-snore.  I have never heard it, I think they are making it up.

Two of my favorites from this week.

Melvin, in all his sweetness… 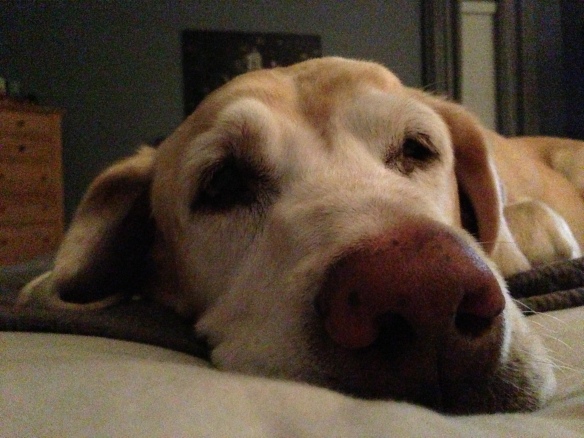 And your laugh for the week, Jake’s new sitting style…(please note hind legs)

I tend to feel that empathy is one of the most lovely of all the emotions.  Our ability to feel for others, in happiness or crisis, matters. The animal blog-world is a crazy, wonderful empathy arena.  We read other’s posts, and nod.  We laugh, cry, cheer and curse for our favorite blog authors.  We have been there.  We are there now.  We understand.  In the same breath, as a writer of such a blog, I am able to put things out there knowing, that empathy is waiting. That even in the hardest or saddest of moment, someone will relate.

And then… just maybe, someone will reach out.  With a comment or an email and sometimes even a gift.  Just one example of many, my blog friend M, who I have never met in person, lost her sweet Brutus last year.  Around that same time, Melvin’s liver values skyrocketed and despite her grief, M pro-actively packed up the liver supplements she had leftover from her boy and sent them to me.  Empathy at its brightest. We have continued a little gift exchange back and forth — sometimes in sad times, sometimes happy, and yesterday I got this.  Just because…

As I have mentioned, Jake snores.  It is a mystery how such loud noises can come out of such a small body.  Regardless of the tremendous amount of honking he produces, I like both dogs to sleep in the master bedroom.  The first few months with Jake were fairly sleepless but thanks to the volume control on the white noise machine and the body’s ability to find sleep (eventually), everyone is finally able to slumber with him in the room.

He currently sleeps in a crate — for two reasons. One, I’m not 100% sure he would ‘hold it’ all night if not in his crate and secondly, the crate keeps his snoring at a distance that gives the noise machine a fighting chance. The plan, however, has always been to try him in a bed and ditch the crate.  I’ve delayed on this mostly because I love sleep so much. So much.

His bed (the smaller, matching version of Melvin’s) is on order.  It will be a slow transition to it, we’ll start by putting it in the bedroom and just letting him find it for naps or give him Kongs on it. Some days, I’m sure Melvin will end up on it.

In preparation for two matching dog beds, the decorator in me had to start the rearranging effort.  Part of that required Melvin’s bed to be moved, about 3 feet toward the window.  He was not happy about this new real estate.  I kept saying ‘the worse is yet to come buddy, wait until you meet your new neighbor’.

Seriously, they could win medals…

The other night.  This unfolded.  I may have enjoyed it a bit too much. Jake walked in to find a roadblock and he was immediately perplexed.

“Ok self, you have a really big head, use brain, what are the options here…” 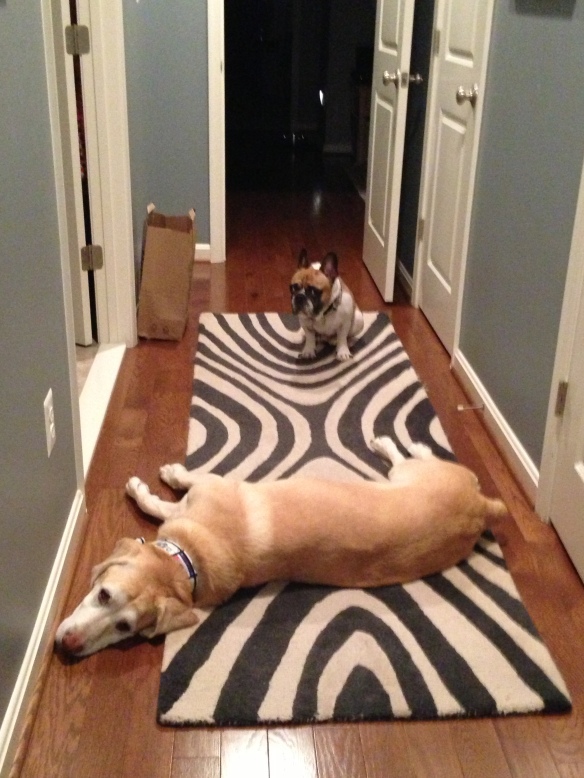 “There is a slight gap down there, ugh, it’s doubtful I can get through without awakening him.  This is what it must have been like to live with dinosaurs…” 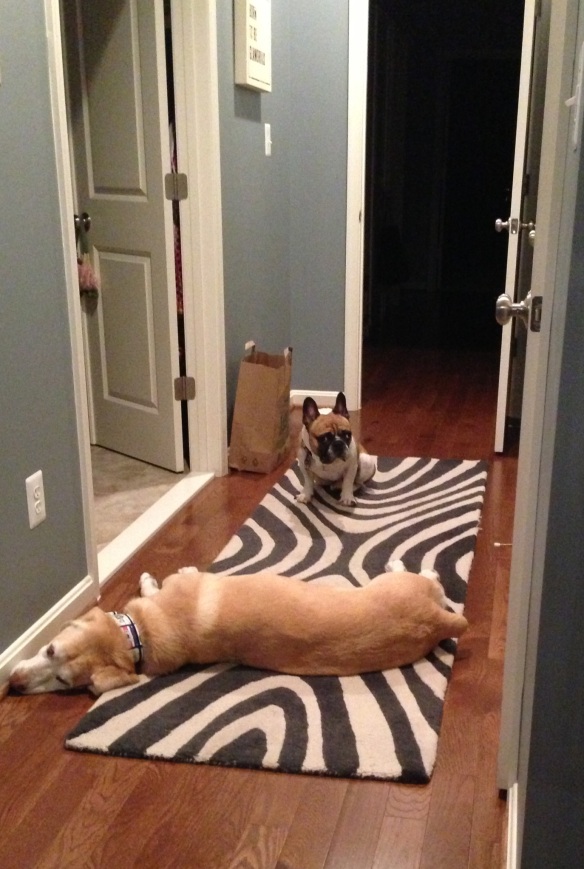 “There is no way in hell I’m going that way, that is where the teeth are…”

“Maybe if I inch closer he’ll just, move.  Big head, will him to MOVE…” 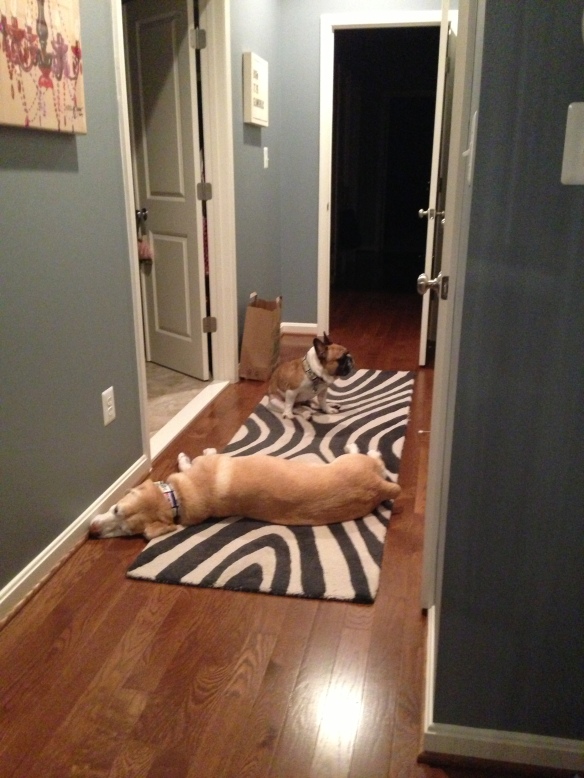 “I’m going to go into the bathroom and come back out.  This may just be a bad dream…” 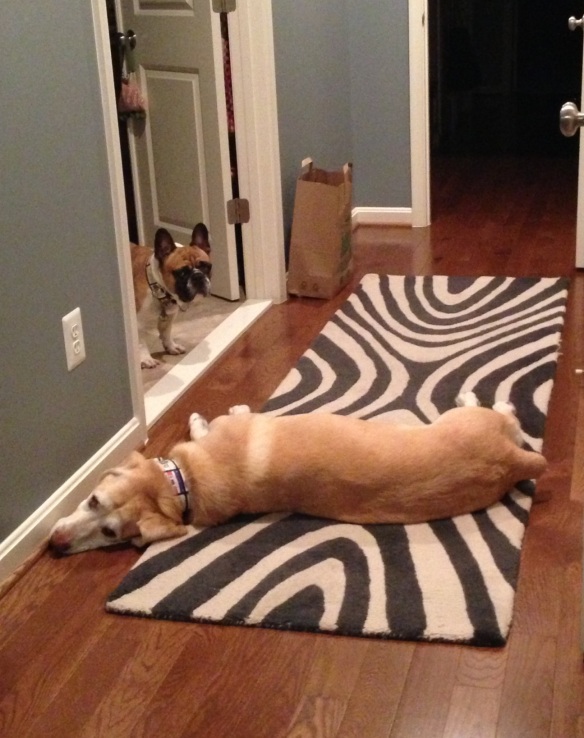 “This is it, I’ve realized my level in hell. I doubt they have treats…”

“I’m going to give her ONE MORE look of despair. Hmmmmm, it seems really hurtful that she is STILL laughing.” 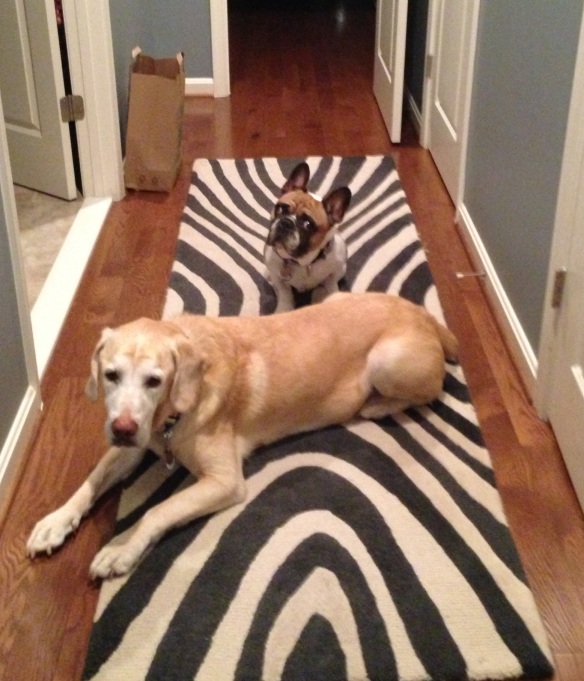 There are those moments you know that YOUR dog was meant to be YOURS, that in all truth, they found you.

My moment with Melvin was when I realized that he was pulling me (literally, via the leash) forward in life. Forward from grief and hard’ish life moments.  Forward, through them, not away from them.  He is my journey.

My moment with Jake came last night.  They were calling for some storms so after our walk we went into the backyard in order to batten down some of the hatches.  At one point I came around the corner to find Jake, paws up, against the house.  If you need more of a visual, it was as if an invisible cop was behind him and he was arms up on the building for his frisking.  Mine.

Upon closer inspection, I realized that he was eating dried plumbers putty from the hose connection to the house.  Eating it right off the house, scratching his nose on the brick, like a true foodie.  Mine, mine, mine.

Yes, I spent the $40 on the phone call to animal poison control.  Plumbers putty, when dry, is non-toxic.  Of course the Dr. did share with me that all other calls she’d had on plumbers putty was of dogs eating it fresh, from containers, usually at an actual plumbers house.  That this was the first time the ingestion was, paws up, eaten off a house.

Say it with me again, mine.

We are watching him for signs of blockage, but for now he seems to be all Jake.

I have migraines.  It is what it is.  They come and go, that’s life.  I don’t feel sorry for myself, I try not to complain too much, and I get really excited when I wake up and they’re gone.

One of the biggest areas in life I’m most grateful for, is family and friends who step up to help.  I put the call out, that Migraine Contingency Plan is code red, and they go into action to help with Melvin and Jake.  And the boys…well I couldn’t ask for less demanding, more understanding dogs.  I’m blessed.

This weekend was rainy and migrainy…

It started off as normal bed snuggling…

Then Jake opted for the sidecar… 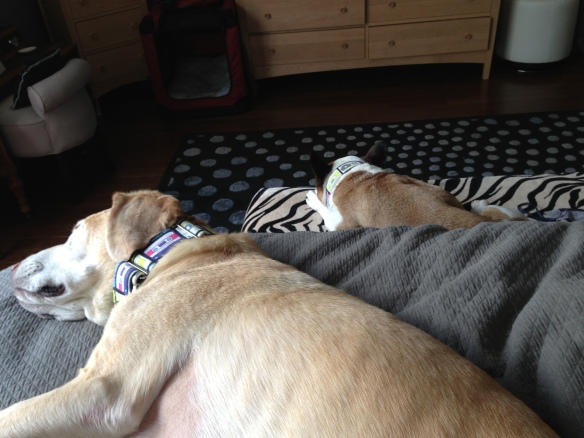 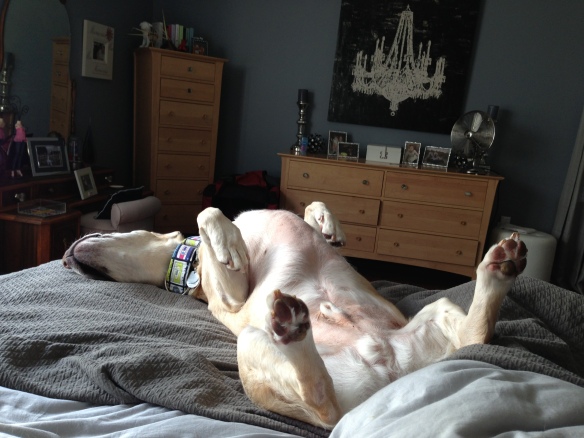 Then Jake prayed that meals would not be forgotten…

And treats, don’t forget the treats…

Then they said ‘screw it, let’s cuddle’…

Then Melvin decided one more time for good measure…

This is Jake’s new nightly ritual.  Don’t worry, he’s still dating the carpet, they seem to be going strong.  But the couch has become his second love.

When he first came, I felt like I was being punished.  I mean me, Melvin-man, punished? For what? Being so awesome? Let’s be honest, he’s an odd little dude and it has taken some getting used to.

He’s little.  He’s like a toy, and instead of a squeaking noise, he grunts and snores.  It’s hardly adorable.  I’m fairly used to his noises now and usually I can avoid stepping on him when we are running towards the door or in close proximity. I mean, little is fine, whatevs.

He has odd bursts of energy.  When we get up, he busts out of his box-bed like he’s a greyhound behind a race gate.  I mean where is he going? The bedroom door is shut dude, you’re gonna hit the wall every time.

He doesn’t listen.  She calls his various names a lot.  I think her hands hurt from making snapsy noises to get his attention during the day.  Who knows, maybe he is paying attention to her, with those eyes, no one can tell.  I don’t look into those eyes, he may be my brother but that doesn’t mean he can’t also be into voodoo.  The two are not mutually exclusive.  Zombies are not cute, count me out of being hypnotized by his googly eyes.  (Hey, that rhymed  I’m so poetic).

A couple of times dude tried to fight me (HAHAHAHAHAHAHAHAHAH, can you imagine?).  He got his googly eyes all in a bunch over my empty Kong.  That kid has an odd sense of reason.  Anyway, he leapt at my face (uh news flash genius, you can barely get on the couch, how you gonna reach my face?).  I looked at Her and She seemed to hope I’d take the up high road (that road always seems far) so I just moved my handsome face away from his attack and She was able to get him off of me.  That only happened a few times, each time over an empty Kong (clearly he doesn’t get smarter with age).  But for the past few months, it’s been fine. What?  You want me to knock on wood?  Is that code for eat more?

Every time I wake up he’s sitting with his arse in my face.  Why people, why?

The other day he leapt off the couch towards the window after a bird that was flying by. He was inside.  The bird was obviously outside.  Oh yeah, we’re keeping him, that dude is funny and me likes to laugh.

I’m curious if any of my dog writing/training friends know what this is about.  Jake, daily, will sit in front of where Melvin already is and then inch backwards towards Melvin.  He then just stays there.  In each of these photos, he started out a foot or two further away, then he beep, beep, beeped it back up. 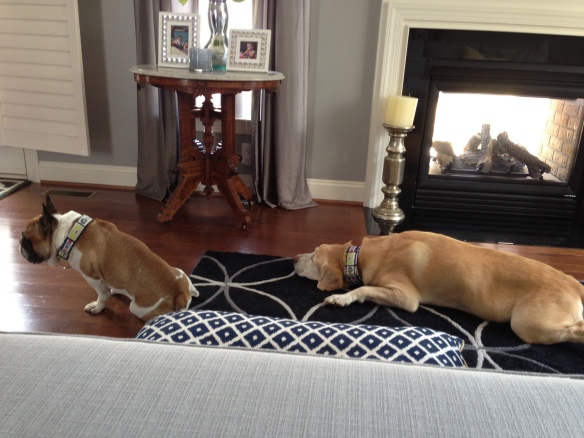 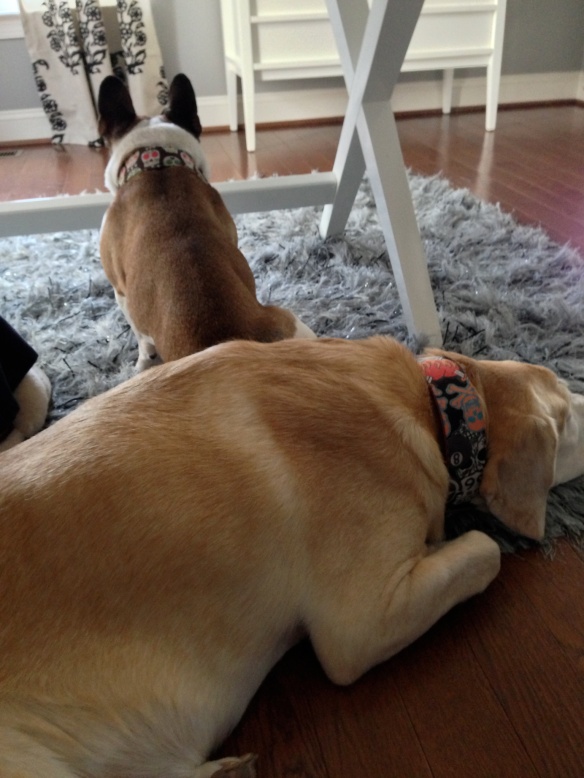 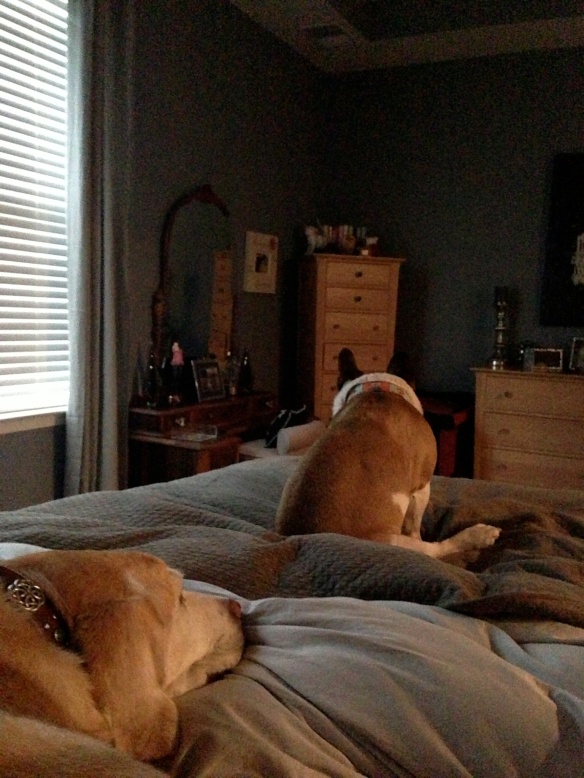