I couldn’t find him and then I did. He climbed up and used my new dresses as a mattress.  This chicken nugget is genius. Video proof below. 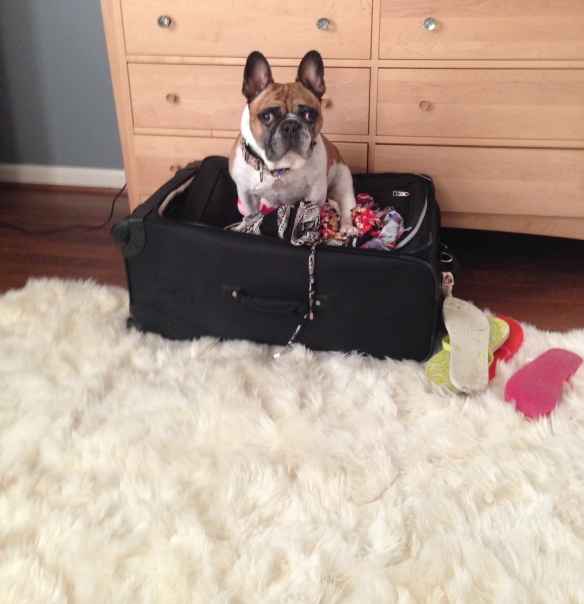 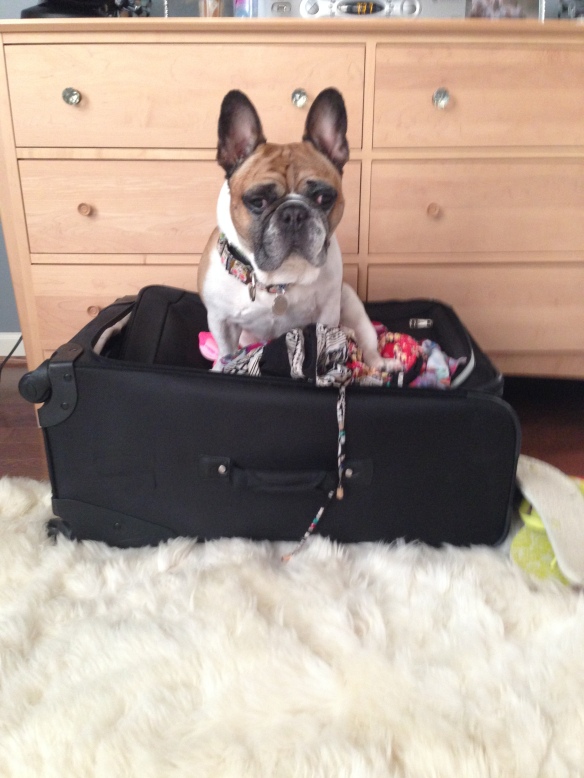 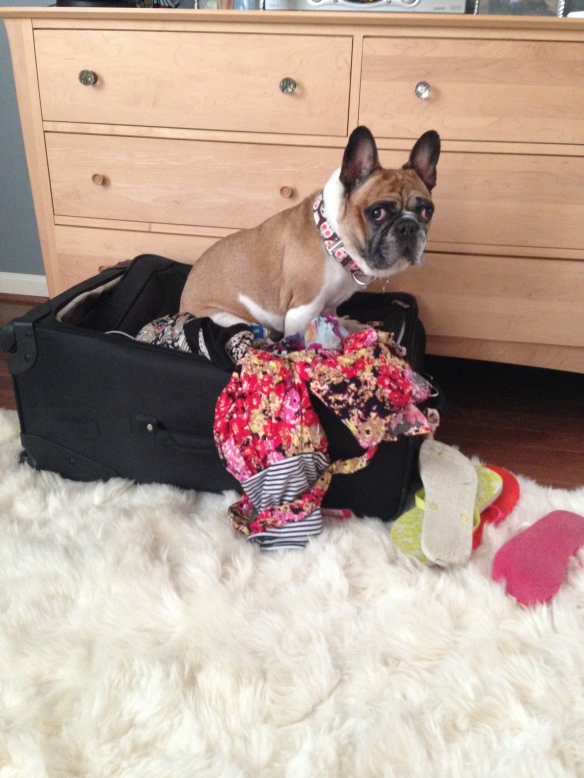 I was able to save the dresses without waking sleepy beauty.

Six years ago, Melvin got me.  He sent his powerful mindwaves across several states and jedi-mind-tricked me into looking at the rescue-site one last time before making my adoption choice.  (The rescue group I got Melvin from requires you to meet at least three dogs before you decide. Melvin ended up being #4.) I logged on to the interwebs, I saw him and that was it. HIs rescue of me was official.

He may have been a hot mess but I was no prize.  Max was nearing the end, I’d had a year of health challenges.  I was desperate to move forward.  I think that’s why Melvin picked me.  He thought, ‘hey, I have a  lot of energy, I can and will pull her kicking and screaming (literally)  into the next chapter of life. She’ll be my living rickshaw.”

In six years we have dealt with more health issues than a small village could have. I have laid on the vet’s floor with him more times than I care to count. We have romped, and wagged and cried and one of us lost a tail.  We have growled at each other, leaned on each other and glanced at each other 40 billion times. There was a lot of drool.  I have watched him transform from spazzy to soulful. From fearful to a love-craving fool.  I watched as he searched for Max, long after Max died and I was there as he made room for Jake. My heart has become full from just knowing him.

I will never love another dog the way I love Melvin. That is how it should be. Unique, unconditional love.  He is perseverance, he reminds me that happiness is a choice. He is the perfect balance of kind, goofy, love and joy. He is the dog that makes someone be a dog person. I promise him understanding as he continues to age, I know he will give me the same.

If he could write his own post I think he’d sum it up like this… She feeds me and she smells like love. I choose her, forever.

This photo is Melvin’s first 5 min in our house.  He fooled us into thinking he was low-key! 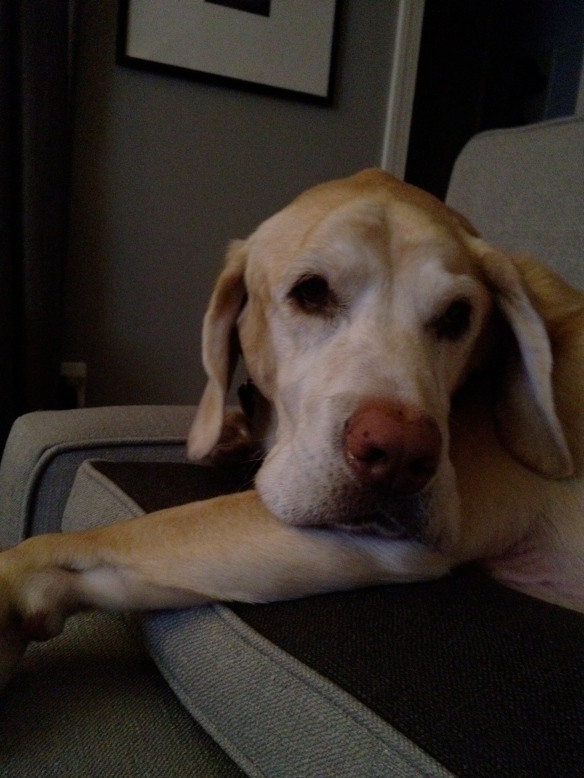 The dogs I have had so far are a Schnauzer and Collie (during childhood), a Saint Bernard, two Labrador Retrievers and now a French Bulldog.  Prior to Jake, none of the dogs I owned cared to hunt.  Max and Melvin chased squirrels but to be honest, I don’t think either of them would have known what to do if they caught one. They’d probably have been terrified.

Jake on the other hand, well he’s like a little caveman.  “Must hunt to eat”, which is totally not true since I am the one who buys all the dog food.  Dude is 33 solid pounds, going hungry is not something that happens to him.

You know about the frogs, and about stalking the birds.  If there is any rustling of leaves (Jake does not understand the concept of wind) he will attack said pile of leaves until he is sure nothing living is hiding there. Well now we can add bunnies to the list.

A family of bunnies lives in our front yard bushes. I’m fine with that, hopefully they won’t feed on the new flowers planted but whatever.  Jake walked outside one day (he goes buggy-free on good legs days) and we were 40 feet from the front yard and yet he knew they were there. Bunny scent wafted straight up his flat face.  The walk was over, he had to hunt.  I of course had no clue why he was puling me towards the front yard, let alone the bushes until Bugs Bunny IV. leapt out from under some flowers and all hell broke loose in our yard.  When Jake is hunting, the world around him disappears.  There is just him and the prey.  It’s like his own version of the Matrix.  It’s so severe that I have to pick him up (he kicks and honks) and take him back inside. (In the meantime, Melvin has this look on face like: “OMG, why can’t we just take normal walks like other families.  Why does Jake ruin this for everyone?”)

Once inside, he will “run” to the front of the house and try to hunt the bunnies through the walls.  He may not be super smart or very fast, but he is very persistent. I have never understood prey drive until he came to live here.  The fact that he knows the bunnies are there means that he will 100% always think they are there, long after they have left.  We saw a cat once in a field where there are now houses and every time we walk by there, he moans with desire from inside the buggy.

“When is Easter? I’m hungry”

You know how sometimes you will hear ‘I never win anything’?  You will never hear me say that, I win stuff all the time – I don’t know how but I aints complaining!  Most recently I won a giveaway from Adventures of a Dog Mom!

The giveaway was from Maddie Lab Studio and I immediately knew which piece I’d pick if I won, in fact If I didn’t win, I was totally going to order it.

Dealing with Maddie Lab Studio was AWESOME and the print arrived quickly and wrapped lovingly!  It’s being framed but I’ll be sure to post photos of it once it’s up in the house. 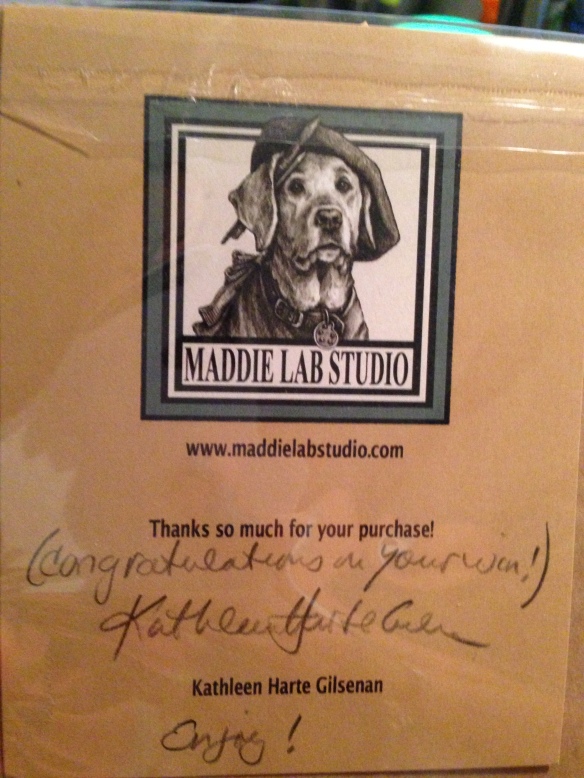 I love art like this, I have a canvas print of a deer in tubes socks, no clue why but it makes me so, so happy.  This print will fit right in! 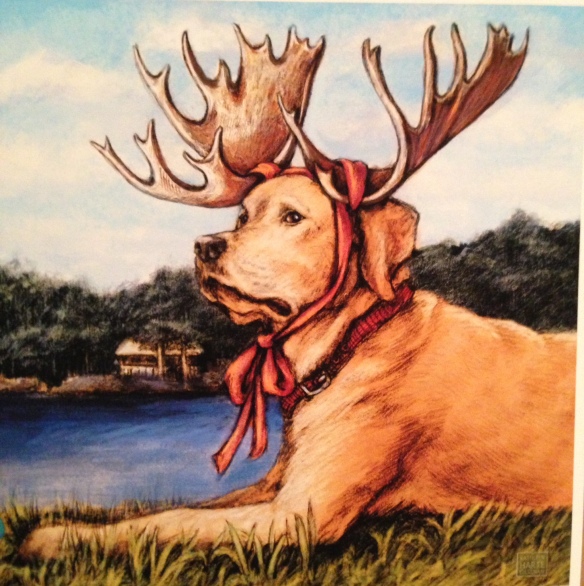 Thanks to Adventures of a Dog Mom and Maddie Lab Studio!!!!

I was looking over recent search terms that landed people on the blog.  Some of them probably found what they were looking for (??) while others…not so much (I bolded the ones who may have had to rethink their search criteria once they landed on our blog). 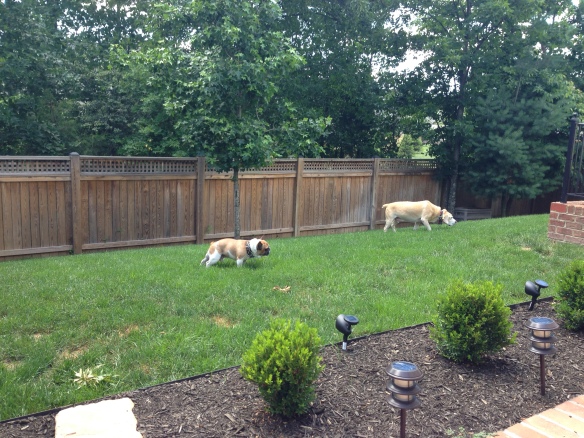 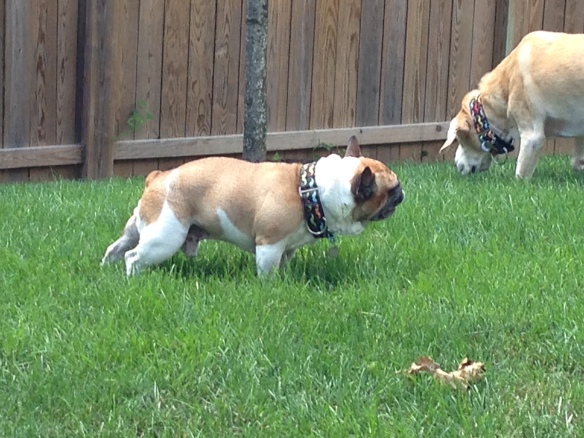 Jake’s allergicness issue seemed to clear up Friday night and Saturday.  I got a migraine on Saturday that went straight through Sunday night.  I woke up Monday morning and celebrated that my head no longer hurt. Jake celebrated Monday morning by throwing up his weight in vomit.

I took the boys out, fed them breakfast and we went back upstairs.  Half an hour later, Jake started throwing up.  Over the course of the next hour he seemed to thew up undigested food, which,  judging by the amount, seemed to be from the last few days.  WHERE HAD HE BEEN STORING THIS STUFF?

It is important to note here that Jake is pretty iron stomached.  Stuff goes in one end comes out the other end. He has never had the runs and has only thrown-up once, post anesthesia.   So I took him to the vet, again.

He was not in pain, he was hydrated and he had gone to the bathroom (both) that same morning.  His temperature was normal.  Aside from taking all the stuff on the inside and spewing it across surfaces in the house, he was…fine. He got a few shots to help with nausea, managed to have diarrhea all over the lobby of the vet (our lives are so magical and sexy) and we got a few prescriptions to take home with orders not to feed him until evening.

Jake went home and slept all day.  The only time he got up was to smell Melvin but then it was back to sleep.  He got some rice for dinner and slept well all night.

We shall see what today brings for the little monkey.  Hopefully it’s boring and extremely uneventful and having nothing at all to do with the V word. 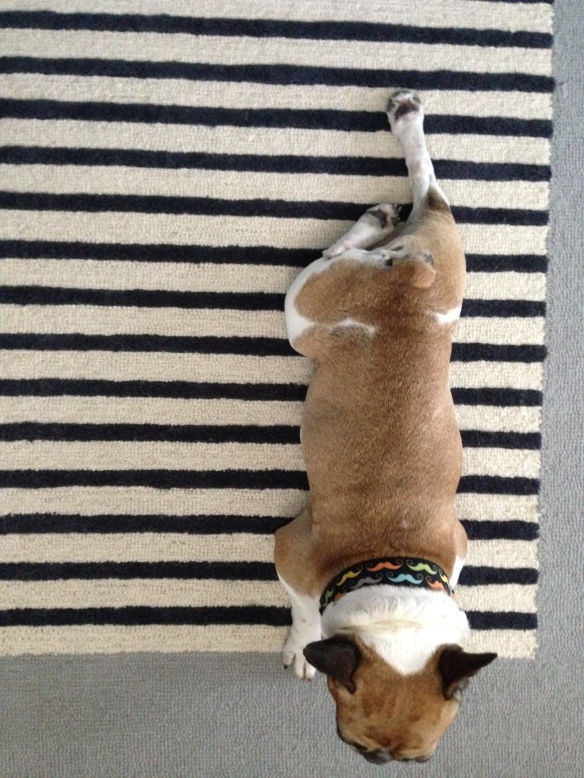